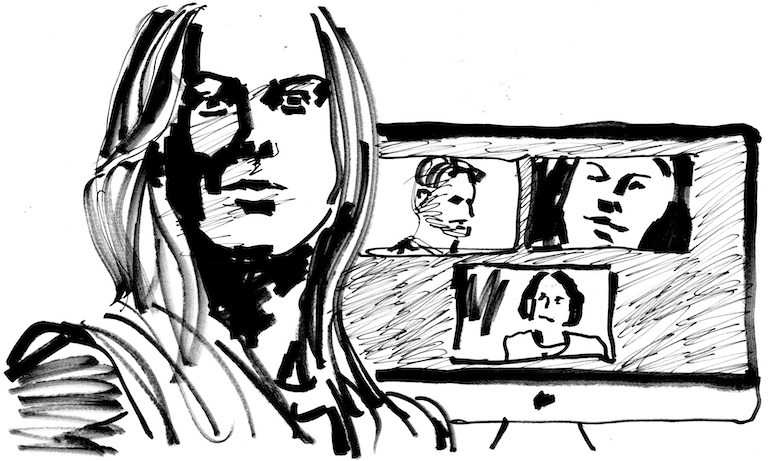 Incomes for professional creatives have not increased in 30 years. As a result, it has become harder than ever to find economically sustainable creative work.

Now with the virus, clients are putting projects on hold. Some creative employers are laying off whole groups who are not considered core to their enterprise. All this has left many creatives with little or no income.

Those who are working feel more vulnerable, knowing their jobs are at risk and that they have few options if they lose their jobs. So here we are, with competition to win new business and expand existing business becoming more intense. And in some cases the chase for dollars has become vicious in the quest to survive, as this story illustrates.

Kat deals with a setup

“Sharing the client was a bad idea.”

That thought shot through me as I ran up the stairs. Running a little late, as usual. “A really bad idea. But I didn’t have a choice. The client, VW, was around half our revenue these days. Scary.”

Office empty, as always with the virus. I was only there so I could do a Zoom uninterrupted by my kids. Wanted the background of our beautiful conference room and beyond to the canal to be real, not the green screen – or whatever you call it when you use a fake background. Wanted to look “real” and as unaffected by the virus as possible.

“Good morning, Kat!” His voice boomed through my AirPods. His round, sweaty face filled my screen.

Then I was thinking, “God, there’s nothing ‘Lance-like’ about this guy.”

I noted that he was sweating. Must have run up his own stairs. Proud of my fitness, knowing there was no sweat on my brow.

“How are you, Lance? How’s your family? Awful stuff we’re going through.”

“Kat, I’m stuck in Paris. Haven’t been home in months.”

Ignoring my comment, Lance charged into the meat of the thing. “Kat, I’m… bringing in Clark, head of creative at the agency, and Arianna from VW to kick this thing around a bit.”

Another flash of insight hit me: This asshole is trying to undermine me with our client. He means to kick me and my company, T-Styles, around – not “this thing.” Shit.

We’re a small design shop. With a lot of hard work and a stubborn commitment to a focused style, we’ve made a bit of a name for ourselves. And yes, we’ve made it to the big table with a few of the global brands – Volkswagen being our biggest so far.

Now, forced to collaborate with VW’s agency, I could see that a) hardball was about to be played; and b) we were the ball.

Time to listen, observe, think, wait as Arianna from V-dub and Clark from the agency joined the Zoom.

Lance introduced us. I’d met Arianna a couple times before. In her fifties, she had a long history with VW. Trained at Art Center, if I remembered correctly. But not in design anymore. So I asked…

“Arianna, were you in Sid Mead’s class in Pasadena?”

She smiled widely. “Oh, yes. He was amazing. How’d you know?”

“I have a friend, Don Young, who was in his classes around the same time you must have been there. So, just a guess…”

Arianna went on. Sid must have made quite an impression on her. “Sid got me my first job in Art and Color at GM. And from there to heading up Opel Europe Design. That’s where I was when VW recruited me.”

I could see Lance was pissed now. Even through the Zoom screen I could see the color rise in his pale face. Note to self: “Don’t get cocky, girl.”

“Arianna, we must get together sometime. Sorry, Lance, I know you have an agenda we need to get through…”

I could see that creative director Clark had lost interest and was busy with his phone. Clearly my little connection to Arianna had done part of my work.

Lance smoothly moved to lay out his case. I wondered how he would attempt to render my company obsolete. He’d actually used the word “obsolete” in the text setting up this Zoom. “Obsolete creative” was his phrasing. I thought we were pretty solid with VW senior management. So maybe Lance thought claiming our obsolescence was his best shot at getting the design part of the account back in his sweaty little hands.

And Lance proceeded to try. “Clark, you were talking the other day about the new look for the fuel cell program…”

Now I was thinking, “Shit! Here it comes; Lance has gotten creative at the agency to take us on.”

Maybe my little moment with Arianna hadn’t been enough. Now I was studying her face in the little box on my screen, feeling the moisture developing under my arms. She was inscrutable.

Clark took the lead: “I’ll just share my screen with you.” Up came the cover page of Clark’s deck. “First of all, Arianna, I want to congratulate you and VW for the remarkable turnaround you’ve achieved after the diesel mess. Your ‘replace, recover, restructure, rebrand’ effort was brilliant…”

I hoped Clark had gone too far. VW is super-sensitive on the diesel disaster. As well they should be.

Arianna interrupted Clark, while looking pointedly at her watch. “Lance, is Clark going to tell me that what T-Styles has proposed is not going to work?”

“Then send me the deck. I’ll look at it later. Lance, this better be good…”

“Arianna, this is a critical time…”

Arianna glared into the screen. I hoped her look was directed at Lance.

Arianna addressed me: “Kat, I’ll text in a bit. Thank you, Clark.” And she was gone.

Time to speak up. “Clark, please walk me through your deck. I know your work, and I appreciate any thoughts you and your team have on this project.”

In my experience, creatives everywhere want their efforts appreciated, and they know how to understand and appreciate the work of others. I really was interested in what he’d come up with. Positioning VW in fuel cells in a way that didn’t conflict with their electrics was going to be a tricky business. My guess was that Clark and his team were more inclined to help than to get into a war with a small Seattle design shop. Especially in this time of global pandemic on top of global warming. One of the great ironies of VW was that in spite of their immense commitment to battery power and fuel cells, their huge factories were powered by several coal plants.

As Clark took me through his thinking, Lance looked on – clearly horrified with Clark for sharing with me. But he knew better than to interrupt.

Just then I got a text from Arianna: “The agency deck raises some interesting questions, but I don’t think it changes our direction. Thanks for the way you handled the Zoom.”

I exhaled, not realizing that I’d been holding my breath. Armpits dripping now. Glad for the social distancing. Glad I’d mostly kept my mouth shut.

I listened carefully to Clark. Asked as many questions as I could think of, and kept my eyes on Lance, who had been madly texting. Who was he connecting with? The client? His boss? Then I thought about the consolidations that have been going on within the agency holding companies. With little or no growth over the last few years, jobs like Lance’s have been particularly vulnerable. Maybe his somewhat desperate grab for more of the account was defensive. Hard to actually know. Vicious bastard. I must keep an eye on him.

I texted Arianna and asked her for a time to talk. And then added, “It just occurred to me that Sid Mead’s way of envisioning the future could be useful for us in our thinking about the fuel cell imagery. Some of Clark’s ideas actually fit right in with that kind of future imagery.”

Note from Ted: I think of stories like this as ‘strategic tales’ I write them as way to use experiences to consider and prepare for possibilities. Join me at the next Zoom Mentor Morning, Saturday, June 6th, 10-noon as we discuss strategic tales and the power of telling: https://tedleonhardt.com/ted-events/strategic-tales/ 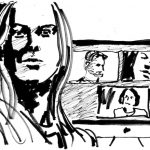