Dangling A Deal You Can’t Make Good On 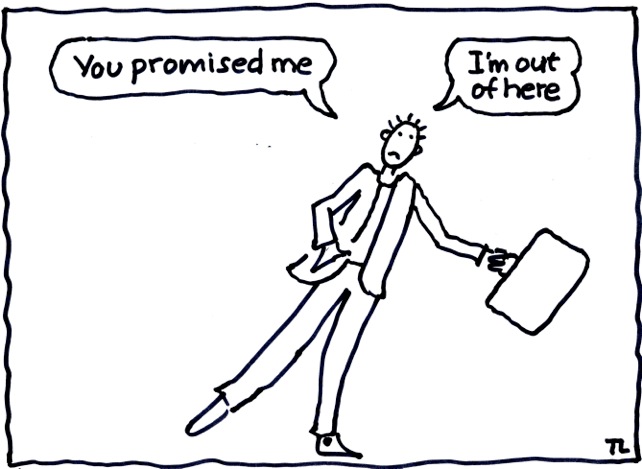 A few years ago, I’d been called to work with two clients attempting to renegotiate their partnership agreement.

They had been trying to update their deal for at least nine months but remained at an impasse. Why? They had been working together for years. They were both major contributors to the success of their business. The were very comfortable with each other, collaborating on all kinds of business issues and learning from each other’s perspective and experience. Although they had entirely different personalities and leadership styles, both were highly respected by staff and clients alike.

Why couldn’t they reach an agreement on this issue? Admittedly, this was a more personal issue than their usual collaboration. It potentially put numbers on their individual contributions to the business. So self-worth and respect are reflected in the outcome. But, they had dealt with these deeply personal issues in years past and reached mutually agreeable solutions.

So, what was going on? Four years earlier the senior partner had said that he’d allow the minority partner to become equal to him in share ownership when their current agreement expired.

Now, in spite of the minority partner’s outstanding performance the majority partner was saying no to equal shares: “It’s personal. I must be the sole final decision maker. I’ve worked 20 years building this business and I will not sign a deal that gives anyone an equal say.”

The minority partner replied: “Robert, I must work with you, not for you, in our efforts to continue growing the business. That’s what I’ve been working toward these last four years.”

If equal shares had not been dangled, if the minority partner had not felt misled, this dangerous and uncomfortable issue would have never been an issue. I say dangerous because this issue, if left unresolved, has the potential to completely undermine their relationship and, worse, potentially divide the firm.

I’m sure that some readers will think: “How stupid, this is obvious. Of course, you shouldn’t dangle a valued partner or employee with an ownership deal you can’t or won’t honor when the time comes.”

But, I’ve seen variations on this story time and again, often with devastating consequences, usually ending with the offended party leaving, often taking staff and accounts and setting up a competing firm—a competing firm not only fueled by a desperate need for survival but also with a deep desire for revenge and retribution for being rebuffed and insulted in the process.

Consider for a moment the individuals who are offered deals like this. In my experience they are the top performers—highly successful people: top sales executives; senior account directors who have deep rich client relationships; creative directors who’ve received major acclaim for their work and drive business to the firm as a result; chief operating officers who run and manage offices or regions.

So why would an intelligent, thoughtful leader dangle a deal they know that they will not make good on when the time comes? Because they fear that the person will leave if they don’t offer such a deal. Offering it in the future seems to insure a bit more productive time before the day of reckoning. Perhaps they think they can wiggle out of it in the future. Or perhaps they just haven’t thought through their own feelings on it. Maybe they have a self-destructive streak.

But, in any case, when the day comes, you can bet on the fact that unless they fulfill their promise in a manner that meets the other party’s expectations there will be, at best, a difficult discussion and, at worst, the demise of their firm as they know it.

Happily, Robert and his minority partner did reach an agreement. Robert apologized for misleading him and his partner graciously said: “I understand why you dangled me.” He went on in essence to say, “I forgive you.” In this case their relationship was strong enough to weather the storm. But it easily could have gone the other way.

Never dangle a bargain you can’t make good on.

This article originally appeared on HOW Design. 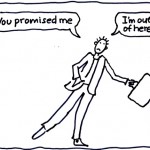