I learn the pleasure of teamwork

It was the last load of the day – and a good thing, too, because the sky was dark with the promise of rain.

I was 17, and my truck was loaded to the brim with wheat as I bounced gently over the plowed field on my way to the granary some 20 miles away. I felt the first tire go – a slight shift in the rear of the truck – without knowing what it was. The second failure was more dramatic. The bed hit the dirt hard; my truck stopped dead. I leaped out of the cab to find that the weight of the load had driven the axle into the dirt, and the bed was on the ground on the side that had lost both of the dual wheels.

Then it started to rain.

I ran the mile back to the combine and the rest of the crew, where Abe yelled his instructions: “Ted, use the Jeep; go to the shop and grab the jacks and as many blocks as she’ll hold. Get back here as fast as you can. Dave, get the empty truck. You and John cover the load with the tarp and start transferring it. We’ve got to save that wheat.”

When I got back to the broken truck Abe had the buried axle almost uncovered. Dave and John had half the wheat moved to the other truck, lightening the load considerably. The first squall had passed, but a second was on the way. The surface of the dirt had turned to mud and Abe was covered in it, but it didn’t slow his efforts.

Abe had discovered that the wheel studs had snapped. They looked like they had crystallized. From age? From years of overload? Who knew. I was relieved; I was afraid my driving had caused the wheels to fall off.

Abe began the careful process of jacking and blocking. Inch by inch, he raised the truck until it was high enough to block up the axle, so he could remove the remains of the wheel studs and thread new ones into the axle flange.

Dave, John and I finished transferring the load. I drove the load to Central Ferry, relieved to arrive before closing and thrilled to be part of a team that knew how to move with care and speed in recovering from a disaster that could have cost the farm thousands in lost income from spoiled wheat. Thrilled to be working like a man. Included, needed, and contributing just like the other man on the team.

This is how I discovered the pleasure of teamwork 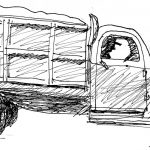