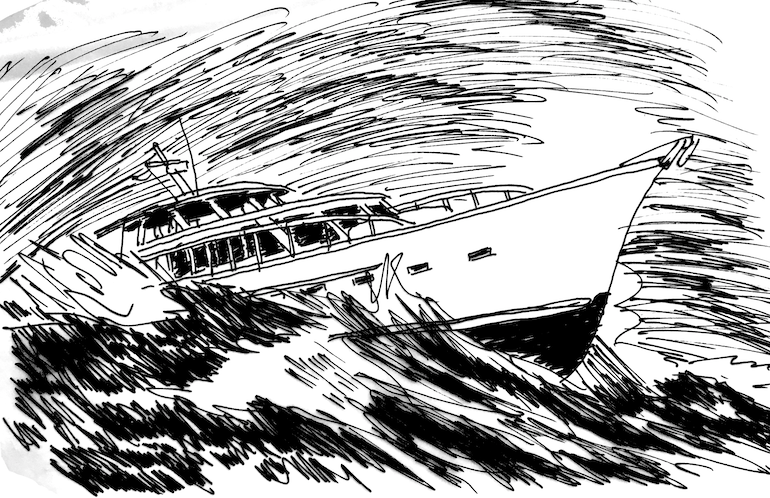 It wasn’t only the wealth gap that had gotten her attention, confirming that things were out of whack. There was also alarm over the warming climate. And what really scared her was when she noticed the insects were mostly gone.

The impact almost threw Brie out of the bunk.

“Arial’s boat. I’m on Arial’s boat.” This realization occurred as she searched for something to hang on to, hearing and feeling the groan of the hull as the waves hit the boat.

Awake now, she dropped her legs over the edge, feet searching for the floor. Pitch-black. The second impact was staggering, throwing her into the opposite bunk rail. Hands searching for the light. There – light on.

She made her way down the passage, bracing herself to stay upright. She could hear the beat of the diesels. That was reassuring; Arial must still have control. Up the steep stairs. Through the salon to the pilothouse, where Arial was bent over the controls, working the wheel.

It was eerily dark. Only the whitecaps were visible in the surrounding waterscape.

Arial noted her unsteady arrival. “You’re up. Not surprised. We’re in the straits, and we’ve had a weather change. Hence this rough stuff. But we’re fine; Miss Ann has handled much worse.” Then, just as a wave crested the bow and washed across the pilothouse windows: “Hang on, Brie.”

And hang on she did. It was all she could do to keep upright.

“This is going to get worse. We’re not going to make it to Port Angeles tonight. I’m heading for the safety of Washington Harbor. We can tie up at the marina there and just wait this out.” She gestured to the map displayed on the screen, to reassure Brie.

A queasy hour later, it was still raining hard, but they were safely out of the wind and the strait’s breaking rollers and into the calm waters of the bay.

Arial tied them up at the guest pier and used the marina’s pay phone to let the group in Port Angeles know where they were.

Climbing back aboard, she asked Brie, “How are you feeling?

“Much better. Thanks for your mastery. Once my gut realized you were so competent, I calmed right down.”

“Well, you had a hell of a day. Let’s go below and relax. There are sandwiches and a decent wine in the galley.”

Once they’d settled in the galley, Arial asked, “What turned you?”

Finally, after a few moments of silence, Brie replied. “And turned I was. I was a consumption girl. You know that I was adopted?”

Arial nodded. “Yes, I did know that.”

“Well, after much analysis, deep work and self-discovery, I realized I should never have been placed with the couple who raised me. A shrink told me I’d separated emotionally when I was very young, 5 or 6, not as a teenager like most people. Wanting out from under their control was my focus. Doing everything I could to not be like them.

“So I was very young when I became aware of style, and the sheer abundance of stuff depicted in the media. That ideal life was my way out. All I had to do was acquire and surround myself with those things depicted in the ads, to get away from the gray loneliness of their home.”

“Yes, yes, the ultimate little consumer,” Arial replied knowingly. “Driven by the need to escape your pathetic life. I get that. But why did you change? And don’t tell me it was because you found consumption hollow…”

“It’s hard for me to put my finger on it. I’m still sucked in by style and the poses that go with it. It’s just that I have a deeper understanding of the whole of our economy, the history and how our lives are bent to serve the status quo. And the damage that’s done.”

“But, Brie…” Arial had the annoying habit of pressing her case beyond the conversational comfort zone. “You spent your career in branding and corporate communications before joining Overture.”

“Yes, I know, and you’re right. I was a contributor to global warming, the wealth gap, the rolling pandemics and the mass extinctions. I was all in on the power of creating brands, without much thought of their effect on people and planet. I didn’t know shit.

“What caused me to change? Well, first I think it was when I realized how unfair the world had become for other people who were like me. I was lucky to catch the brass ring of branding just when it was in demand. But when I began interviewing creatives and doing more thoughtful writing, I began to understand that most had not been as lucky as I had been.”

Brie paused, took a sip of her wine and focused on the pleasure of being with her friend, snug in the warmth of the old boat. “And then what happened?” she asked herself inside her own mind.

It had been waking up to the fact that the current generation was not only falling out of the middle class into poverty; they weren’t starting families, either. Human sperm counts were collapsing around the world, presumably because of man-made chemicals in processed foods and packaging. Brie hadn’t put those chemicals there, but she sure had helped the perpetrators push the products.

Looking at her trusted friend Ariel, Brie could feel tears beginning to form.

“You know the bees are mostly gone now? And we’re not making any babies, either.”

We can fix this. 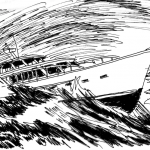