The case for a creative co-op

The co-op movement is alive and well in the Seattle area. REI, PCC Community Markets are two famously thriving local based co-ops. Credit unions are also thriving. Seattle’s own BECU is the fourth largest in the nation. And co-ops are thriving in the U.S. according to the recently published Everything For Everybody, by Nathan Schneider

Are creative co-ops a possibility?

Today, corporate clients receive creative services from a large number of
freelance individuals and small firms. Something like 40 percent of the U.S. workforce is now freelancers or independent contractors. This is the gig economy.

The upside of this structure is the independence of working your own hours and being in control of your work life. The downside is maintaining a steady flow of income. When independent and freelance creatives are engaged on a client assignment, they’re often so busy meeting the needs of that project that they have no time to search for their next client. And when a project needs more than one set of skills or is too large for one creative to complete alone, it’s often difficult to quickly find qualified talent to help out.

Clients pit individual creatives against each other in search of the lowest cost. Clients are the sole source of income for freelancers, so they have all the power in the relationship. And, of course, they can hire and fire (i.e., not hire) at will.

I’d like to explore forming a creative co-op, owned by the workers and managed in a cooperative, democratic manner. The co-op would bill the clients and pay members established hourly fees for the services provided. Clients would pay a service fee on top of the project fees, to cover the co-op’s operations and a profit. Profits would be paid to workers based on their contributions.

The co-op would offer as wide an array of creative services as possible. Certainly it would start small, perhaps in a niche, but it could expand rapidly as the sales and marketing efforts ramped up. Member owners would be in a contract relationship with each other, so an individual couldn’t legally work for co-op clients on their own. Better than that, I’d hope members would know it’s in their best interest to stay in good stead with the co-op. They own it, after all. And since all client work would be paid in advance, the co-op would pay members instantly for work performed – something freelancers don’t often get – and distribute profit quarterly.

I would expect members would finance the startup efforts; it shouldn’t be expensive. We’d need some advice from professional co-op people, some legal to get the agreements in order, a bookkeeping service and some software to track project costs. Also, some donated time for branding ourselves, creating a website, PR, social media and so on. Later, with some size we could consider an office and a nice workspace if members wanted a place to meet or collaborate.

The creative co-op would market on behalf of its members, with the goal of finding large projects that would require the services of multiple co-op members with a variety of skills. With success, the co-op could become the equivalent of a large employer, rivaling the advertising holding companies and management consultancies. 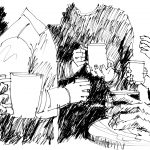