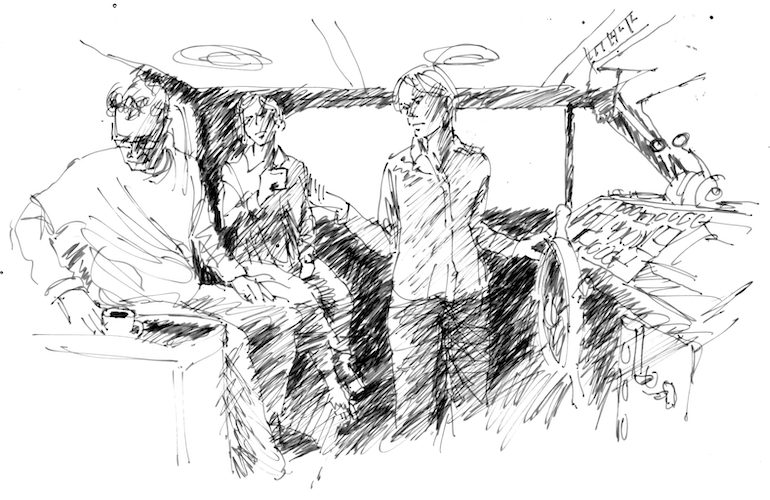 Brie and Tommy were sitting on the big bench in Miss Ann’s pilothouse as Arial skillfully guided them through the maze of small boats, past the breakwater and into the Strait.

Gray skies reflecting into large glassy rollers. Sea and sky joined in Paynes Gray monotone. Bright enough that squinting was required –– yet the monotone of water and air made seeing where sky met sea impossible.

They were quiet. Feeling Miss Ann rise and fall with the swells as Arial set an easterly course. They were headed to Gig Harbor to meet with their former colleagues from Overture.

With the big diesels set to cruising speed, the trip would take all day. Time to relax. Time to consider.

“I’ve been watching the decline for years.

“It must have been 2005 or so when I felt the first glimmerings of awareness. And I was late to the party even then.

“Once I engaged, I realized that things were getting really out of balance. And worse, I also realized that my career had contributed to the problem.

“And, I began to look for signs that somehow we’d wake up and work actively to turn things around.

“I was afraid. And I was becoming increasingly cynical about our chances to save ourselves.

Tommy paused. Sipped his coffee and looked from Arial to Brie.

“Here we have a world awash in capital. We have enough money and knowledge to fix everything. Yet greed seems to override all.

“But now we’re beginning to see a growing awareness that we can’t go on like this.

“Take the fires like the one we just fought. Everyone knows that the warming climate has turned our forests into tinder. And action is being taken to shut down the use of coal and oil. Why? I suspect that when even the cities have long periods of smoky air, naysayers will begin to notice.

Tommy paused again. Discovering his coffee cold, he headed off to the galley with, “you guys want another cup?”

Brie noticed a gull riding along beside them, wings adjusting to the drafts rising from Miss Ann’s passage, “it’s all a delicate balance,” she thought. “We’re all adjusting to the winds of change.”

Tommy returned with a fresh pot and slipped back into his monologue.

“So with the fires, we have not just ash and smoke but hope.

“Take the horrible effects of consolidation and the corporatization of farms.

“Pigs, chickens, cows grown in horrible factory conditions all to produce the cheapest possible product and the highest possible profit. All to increase corporate capital and wealth.

“No regard at all for the animals. No regard for the communities overwhelmed with the smell from the shit ponds or the people living down steam dealing with the inevitable leaks into groundwater, rivers, and streams.

“But corporate farming is also being challenged. The numbers of vegetarians are growing. The dangers of vast mono-crop farms supported by the heavy use of chemicals are now well known. The traditional food market is changing. Farmers’ markets, health concerns, organics, and many other factors are driving change.

“And the rules are changing. A few people will need to get jail time for the bad shit to get shut down completely. But that actually might happen.

“There is far more awareness about animal cruelty now than ever. People are becoming engaged. Some have become ashamed of our meat addiction.

“Then there’s the wealth gap. That one has scared me for years.

“It was when Nick Hanauer came out with his book The Pitchforks Are Coming that I first grasped the danger of the growing gap.

“I met Nick when we did some work with one of his companies a long time ago. When his book came out, my first thought was he’s just another one of those rich guys trying to change his image—trying to blend with the rest of us—trying to avoid being attached with a pitchfork, perhaps?

“He grew up with some level of wealth. So, I don’t know, but…

“Now, although I never read the book, I did agree with the title. And I listened to his podcasts.

“And I began to think that although he’s one of the elites, his message is engaging people. Through his work, more people are coming to understand the problem. His campaign on increasing the minimum wage has swept the country and got lots of local laws passed raising wages. So good work, Nick!

“Engagement, awareness, he’s helping. We still have a huge gap, but knowledge of the wealth gap problem is growing.

“Then there’s housing. Homes have become unaffordable for most. That’s scary. That’s definitely in the pitchforks category.

“We have thousands of people living on the streets, in parks, under bridges, in parking lots, and beside freeways. It’s crazy. Not since the great depression of the thirties have so many people been displaced.

Brie stepped down from the bench seat in the pilothouse to pour herself another cup, “Tommy, the growth in housing prices is driven by the surplus of capital you mentioned.

“Houses have gone from being valued based on use as homes and a safe, secure place to live to become a safe place to store capital. That’s a massive shift. House prices have been going up at fifteen, twenty percent a year in major cities.

“With that rise, more and more people are becoming renters. And when you rent, you never have the chance to grow your families’ capital. Making the tradition of homeownership as a source of capital growth out of reach for ordinary people. Meaning, everyone but the rich and super-rich.”

‘It’s as though in some ways we’re returning to the dark days of the industrial revolution. Maybe someone will write a Christmas Carol, with Jeff Bezos as Scrooge, complete with visits from Christmas’s past and future. God, I hope so.”

Tommy picked up the thread with, “Sales of Dicken’s works have grown. To me, that means people are looking to the past for answers.

“And everybody has heard the horror stories of bidding wars for houses. Or homeless people invading the neighborhoods. It’s awful!

“Again, awareness is growing. I don’t know what the answer is. Perhaps legislation, or how about us developing a sense of morality about how capital is used? Could schools, churches, or service groups help? Labor unions, perhaps? I don’t know.

“Then there’s the fucking pandemics.” Tommy was angry now. Gripping his cup. Starring ahead.

“Yes, we have science to help us develop vaccines. But what about our increasing invasion of formerly natural habit or another accidental escape from a secrete bioweapons facility? The conditions haven’t changed. People continue to turn primal forests into grazing land, and the preparations for war seem to be escalating, not decreasing.

“Both war-making and resource extraction are dependent on vast sums of capital. And capital, in turn, relentlessly seeks reliable investments.

“Weapons manufacturing and the extraction of natural resources continue to return dependable steams of growth and profit for capital-rich corporations and individuals. Either a second accident at a bioweapons facility or an encounter with another dangerous natural phatagin is entirely possible.”

With Miss Ann making her way in open water, Arial entered the conversation with, “Again, millions have now experienced a global pandemic.

“Millions of people have seen the failures of governments to do their single most crucial role and protect their people. So there too it may be that people are becoming aware and taking action.

“We’ve also seen an alarming rise of gun ownership and extremist groups. So the jury is out on this one, I think.”

Arial had turned Miss Ann out of the Straits and south into Puget Sound. The swells gave way to low chop. The sun was breaking through.

“Then there’s the A.I. revolution.” This from Tommy.

“Artificial Intelligence is predicted to replace even professional jobs like doctors and lawyers. Not just truck and taxi drivers.

“Our system requires that we work to make an income to feed ourselves and our families. What are we going to do? All become organic farmers?

“I don’t think so. The farmers will all become robots too.”

Silence. They watched Whidbey Island move by on their port side.

Brie broke the silence, “Well, we haven’t talked about global warming. Except for the fires, of course.

“Global warming is the ultimate insult to people and planet from those who mastered the art of capital acquisition and growth.

“Amazing success with hiding from the damage they’ve caused to the rest of us. And avoiding the repercussions for hundreds of years, if not thousands.

“But really, the worst of it was from the industrial revolution on.”

“Thing is,” Tommy injects, “the availability of info –– thanks to the internet –– people are more aware than ever of not just the great warming, but the cause of it.”

“The honest answer to all this scary shit that’s going on is awareness.

“Once the billions that make up our human community wake up to what’s been going on, change will happen. That change is already underway. 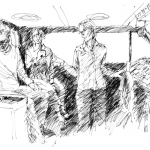