The Power Play: How to Stay in Control of Client Meetings

We creatives are passionate about the work we do. Sometimes, though, we’re so excited to present the work that we miss the opportunity to control the client meeting. Here’s an example on a meeting gone wrong, and my tips for how you can better for your next negotiation.

Julia’s firm had worked intensely in preparation for this meeting with the VP. He was new and hadn’t been involved in the project up to this point. Her client, Bill, said that the VP was a “real pro” and was extremely demanding. The contract required three solutions, but with this new VP she thought it would be best to over deliver, so her team did five. Each solution followed the brief, but emphasized a different aspect. All were on brand and clearly articulated the client’s point of difference.

The morning of the VP meeting Julia reread the creative brief and went over the presentation with her creative director. Knowing how important the meeting would be, she rehearsed and got the presentation down to a concise twenty-five minutes.

On the way over Julia felt confident. She knew her stuff; the work was great and she was over-delivering to boot.

Bill met Julia and her creative director in the lobby and whisked them through sign-in. He was clearly nervous as he led them to the executive conference room.

Julia, who had never been on the executive floor, was thrilled and a bit nervous. She’d worked with this client for a few months and all the previous meetings had taken place in small conference rooms near the marketing group. Maybe the new VP was bringing a much-needed improvement to the status of marketing in the company.

Julia carefully spaced the five presentation boards on the long conference table before the VP whisked in.

“Hi Bill. Good morning team. What do we have here?” he paused. Bill said, “Geoff, this is the product introduction I briefed you on yesterday and…” The VP interrupted, waved his hands for Bill to stop and moved toward the table.

Glancing at the first board he said, “I hate it.”

Stepping to the second one, again, “I hate it.”

Bill and Julia were stunned. Bill thought: “What is he doing? Why is he doing it? What’s happening here?”

The VP moved to the forth concept, “maybe.”

Finally, standing over the fifth concept, “I love it.”

Julia’s knees were weak, her vision narrowed. Her team had sweated blood over the concepts. She looked to her creative director and knew she had to respond, and quickly.

“Geoff, I’m Julia Jones of Jones Design. It would help this effort if you could be more detailed with your thoughts about the concepts. Start with number one.”

“What do you mean by basic?”

“The typography is just too simple”

“Yes it is simple. Direct, clear and to the point. Our goal was just that. We also drew heavily on your corporate brand standards and…”

Geoff almost shouted, “Look, I don’t have time for this. Let’s go to the concept that works. Well, it almost works.” He picked up the “I love it” board as if to see it better in the light. “Let’s go with this one, but give it more breathing room.”

“More breathing room? Do you mean more space between the elements, more white space? This is a significant new product introduction in a very competitive category and you have only a limited window of opportunity. Help me understand your thoughts so we can move this forward and hit your targets,” Julia said.

Geoff rolled his eyes, turned to Bill, “You know what I mean, what we talked about yesterday. Now, I must get to my next meeting.” With that, Geoff walked out of the room. The whole meeting took less than five minutes. Julia was in shock.

Bill closed the door that the VP left open, pulled out a chair and said, “I’m terribly sorry Julia. Geoff came with such a great reputation, but he’s been in such a rush since he joined us. He seems to be trying too hard. Between meetings with the C-suite, conference calls with field reps and — all too short — briefings marketing, I’ve had barely a moment with him. Yesterday he told us that he hates the brand imagery and wants to redo it. I thought he’d take more time to get to know what was working before making any sweeping changes. But he means business about the changes he wants to make.” Bill went on to outline the changes he thought would please the VP.

Julia and her team reluctantly made the changes and presented them several days later. He thanked them, but seemed distracted. Later that day, Bill called. He said that their bill would be paid in full, but that he’d been told he had to fire them. The team agreed this was one of the weirdest experiences of their professional careers.

What was really going on?

The C-suite conference room for a meeting that included no senior executives was a clear signal of the VP’s need to display his power. Under normal circumstances this meeting would have been scheduled in the third floor marketing area.

The VP had no reason to pay attention to Julia’s efforts as he’d already decided to rebrand the company and probably had another team in mind. The real reason for the meeting was to allow the VP to demonstrate his dominance over Bill and the marketing group.

What could Julia have done differently?

Julia lost control of the meeting when she placed the five boards in full view on the conference table. The exposed boards allowed the VP to sweep in for his rude critique.

If she had kept the boards covered, she could have maintained control by first introducing herself properly. A simple introduction would have slowed him down, or forced him to be even more outrageous in his bullying tactics. There are limits to how badly someone can behave in a corporate setting. If he’d behaved much worse than he did, Bill would have been forced to intercede.

After an appropriate introduction, Julia could have continued in control by saying, “I can see that you’re short on time and this presentation will take twenty-five minutes. Is that okay?” This question would have forced the VP to make a choice: spend the time, move the meeting to another time or allow the project to go forward without him.

By maintaining ownership of her team’s work Julia could have changed the tone and, perhaps, even elevated the VP’s view of her.

Several months later Julia got a LinkedIn notice that Bill had updated his page. He’d left the company and had a great position with a promising startup. Julia called him immediately; they had coffee. He told her that, just after he left, the VP had been fired. He also told Julia that he was embarrassed about what had happened in that meeting.

Best of all, he told Julia that he was very impressed by how she handled herself in that terrible meeting and that he wanted her firm to be his design group and develop the brand for his new company. 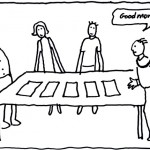