Setting the frame for feeling strong. For feeling empowered, in control.

Sky dark. Still. Dead quiet, except for the light mechanical sounds of the solid lifters. No one in sight. It’s late. Opportunity. I breathe in, feeling cool air passing through me. I taste metal. Light sweat on my hands as my heart slips into quick-time. Power about to be released.

No one in sight. The light turns yellow for the cross traffic. I push in the clutch. Move the lever into first.

The light turns green. I push the pedal through the floor and dump the clutch. Sideways for a moment as both rear tires smoke, catch and throw us forward. Tach hits seven grand. I slam the lever into second. Sideways again for a moment as torque meets pavement. I feel the adrenaline now as the tach sweeps to redline. There! I slam the lever into third, smelling the abuse on the tires. The hood rises again as they grip, throwing me back into the seat. God, I love that feeling. The mechanical scream of the small-block. The violence of unmuffled exhaust. Bam. I pull the chrome ball atop the shifter hard into fourth. Only small complaint from the rubber this time, as the torque falls off. Right foot still hard on the floor. We’re flying now, eating blacktop whole, like a shark swallows its prey.

Right foot still hard on the floor. We’re well past a hundred. Adrenaline lessening now. Too much fun. I let off the gas. Wind and compression take over, and we slow.

I had some of that control – that feeling of raw power – in my work life. But only occasionally did the rush I got in a conference room approach the feeling an old Corvette could give me.

I suppose it was my lack of control and inability to deal with difficult issues early on that led me to cars as escape machines.

Fast was fun, but cars were far more to me than that. Cars were style and pose. They made arriving and departing events worth noting. They hinted at wealth. Suggested strength, or a taste for academic life. Brains, brawn or something in between.

I’m maybe 11. Out playing in the yard when I hear Wally downshift into second and his big Merc play its compression tune out the duals. The low rumble describes the power of an oversized flathead under the Merc’s long hood. Wally chirps the tires as he double-clutches into first and turns into the ally that borders my yard. A tall hedge separates me from Wally as the tires crunch on the gravel and the beast lumbers down the ally. I only barely make out the movement through the hedge. But I know Wally’s thick form is hunched over the wheel as he guides the big car down the dirt drive into the garage his mother rents from Mr. Varriano at the end of the ally. Lingering smells of exhaust and burnt oil mark the passage. Then gone.

Wally was a bad boy who learned the pose in juvie. They said he couldn’t read. Made his money in the midnight sourcing of auto parts. And was wicked in a fight. But I never saw him fight. I expect the black leather jacket and the motorcycle boots he stole from James Dean were enough to keep anyone from seeing if he could back the pose. But with the car and the pose combined, Wally had style and potential violence on his side.

I didn’t have the guts to cop a pose like Wally. My dad would have knocked it out of me. But I did, at 11 or maybe earlier, see cars and clothes as a big part of enabling my escape into a future where I had power and control.

I’ve maintained my love of cars ever since. But I understand much more about why and how cars have shaped me now. I find I get nearly the same visceral pleasure from writing about a wild night-ride as I did from the ride itself.

Cars, clothes and attitude are all ingredients of style. They set the stage for how we’re perceived. In my experience, they can make me feel strong when I’m operating outside the zone, asking for more than I’ve ever asked for, or entering the presence of those seemingly more powerful than I.

Anything is possible when you’re feeling strong. 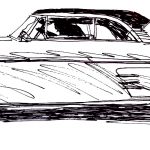