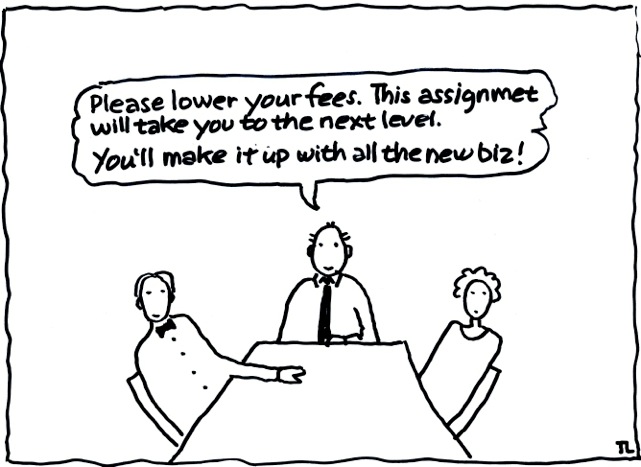 Bidding for corporate contracts is nothing new, although we’ve seen an increase in this practice since the last economic recession. But how do you cope when your long-term client suddenly forces you to compete for the contract you’ve held for years? If you’re like most people, you might have an emotional reaction (dismay, anger, frustration, to name a few).

If you’re like Finn, though, you’ll use that emotion to negotiate through the process and keep the client. Here’s how he did it.

Finn’s team designed the packaging for a client’s most successful hair care brand, we’ll call it “Zee.” It resulted in sales of one billion dollars a year. Yet here he was, three years later, responding to an RFP from the same company, the same department, even the same team members.

“What’s with these people?” Finn thought back to the success they had with the Zee launch. “We knocked it out of the park with our holistic approach, and now they throw us into a competitive situation with an RFP.”

Some call this the “Walmart Effect,” because of their relentless pursuit of the lowest cost suppliers, but it was the 2008 housing bubble burst that really accelerated it. Consumers stopped buying, and corporations tightened their belts. Today, purchasing agents and procurement departments have more influence than ever. And it works! Employment is still off, but corporate profits are high, largely due to cost control.

Mr. Procurement (my shorthand for the person in charge of this process at any company) exists for only one purpose to get the most while paying the least. Mr. Procurement not only attempts to negotiate every purchase from machine tools to office supplies, they often require competitive bidding. Creative services are no exception. Mr. Procurement may even attempt to negotiate over email, after the deal is final, something I’ve talked about before. While most people involved in the process have come to loathe it, it is effective in cutting costs.

So, Finn’s client now required bids from three qualified suppliers for any purchase over $100,000. RFPs are sliced, diced, compared and contrasted. Spreadsheets are created and arguments prepared for the meeting where demands for a lower price are made.

Finn vividly recalled his meeting to defend his proposal:

I was responding to Mr. Procurement’s challenge to every line in our proposal, with my heart pounding, my chest tight and two competitors standing in the wings.

I reminded them of the success of the Zee launch and Mr. Procurement said, ‘With all due respect, I must remind you that there were many other factors in that success.’

A classic intimidation technique meant to undermine Finn’s confidence — Mr. Procurement is a trained negotiator, and has many such techniques at the ready. Finn was not intimidated. He responded:

Of course there were other factors, but please tell me why you would choose anyone else for this, your most critical launch into ‘healthy living,’ when we clearly have the insights you need to succeed?

And, why would you cut the budget? Don’t you know that those cuts will reduce the potential for success? Do you want us to do less discovery or less strategy? Should we cut the research? Limit the creative time? Cut the rapid prototyping?

On the shelf, on the website and in the ads, your market will see only one thing: the look we create. Are you prepared to risk it all on someone who’s not a proven winner? You represent a multi-billion dollar corporation. This new launch has the potential to drop hundreds of millions to your bottom line. Are you prepared to risk that for a few hundred thousand dollars in fees?

The client team asked for fifteen minutes alone. When they reassembled, Mr. Procurement compromised, and Finn compromised, a little.

Later, Finn’s client said that Mr. Procurement was impressed with Finn and that his comments had made sense — this was not a project to risk. Finn had asked for and received the respect he deserved. He did so by asking questions that reinforced his beauty experience, and by explaining the consequences of cost cutting.

Finn was frustrated, but he was confident in his expertise. He used his high emotion to make his case, not break it. Mr. Procurement was protecting his company, and Finn was protecting his ability to meet that company’s needs. Finn was the right choice.

This article originally appeared at Dexigner and Branding Magazine. 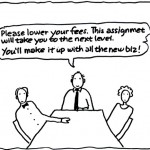