Light in the offing

We’ll need a new model if we want to come out of this alive.

The Guardian headline was the last of the news before I lost my connection. First the power had gone out, then both cellular and Wi-Fi went down “Maybe a walk will settle me,” I think. “Good to see how things look now that it’s quiet.” It has been one hell of a night.

I check the time. It’s just past 3 in the morning as I head out. It’s really dark.

One of my fondest memories from my days in creative offices was of seeing the pleasure teams got from working together on projects with shared goals. Arguing, comparing, competing and cooperating to achieve some mutual success. People working together in harmony, as humans have done for 200,000 or 300,000 years, mostly as hunter-gatherers.

“So, yes,” I think as I walk, “we may be great at cooperating in small groups, but not so great in the larger societies we’ve got now.”

The need to care and be cared for is at least partially encoded in our genes, and fundamental to building what evolutionary sociologist Nicholas Christakis has described as “a good society.”

Christakis claims that we are innately equipped as a species to band together, live cooperatively with each other, befriend each other, recognize uniqueness, show kindness, love and reciprocity in our relationships, and learn socially while teaching what we know. (“Blueprint: The Evolutionary Origins of a Good Society,” Nicholas Christakis)

But clearly, I think, “Our hundreds of thousands of years of living in small bands didn’t prepare us for the level of cooperation we need now.”

Here we are in a global pandemic. When I say global, I’m thinking that the pandemic unites us all. Every person on Earth faces sickness – and some of us, death. We’re in this together. Why don’t we behave like it?

Burned plastic in the air.

I check my watch. It’s half past 3, and “dark as the inside of a hat.” Thinking it’s something Mom would have said, as I see the first of many burned-out cars.

It gets darker as I follow my usual course under the trees. My eyes slowly adjusting, I see store windows broken, cars overturned. I pass the remnants of a police van, and it crosses my mind that someone could have been inside. I shudder and check my phone. Still no service. Better turn it all the way off; no telling how long the power will be out.

Thinking about the pandemic makes me think of the first time we saw that beautiful photo of Earth from space. We could see that Earth was finite. A small round ball in the midst of very black space.

Here we are in the middle of an election – the most divided and contentious election in memory. Votes being counted and contested. A sitting president threating military action. Black Lives Matter protests attacked by supremacists.

As I walk through the damage of last night’s carnage, I wonder if Earth has enough resources to sustain us all. Our “developed world” lifestyle is clearly consuming on a scale that is massively beyond what is sustainable for the planet. I wonder, “Is that what this unrest is all about? Is it the fear that it’s not just the forests that are on fire? Is that why violence seems to just happen like this? Are people fighting to hang on to their little piece of the earth? Or are we fighting to maintain our unsustainable lifestyle?”

The pandemic lies on top of the politics, the growing wealth gap, the homeless on the streets, social injustice, the forest fires and global warming, and all are driven by the need for endless economic growth. We’re all on edge.

“Is their enough for all?” I ask myself as my boots crunch through the glass on the streets from shattered windows and broken bottles. We’re running out of time, and leadership is failing us. Mostly fighting with each other over whether or not we have a problem – and, worse: maybe preparing for war.

We need a new world view. Still dark, just after 4 now. I turn a corner and see a store window with a light on.

“Is there a way, a system, a method, another way for our economy to actually make it possible for us all to share in what the earth provides equally?” I ask myself as curiosity draws me to the light.

It’s a bookstore window, lit with what must be a battery-powered emergency light, shining on a display of Kate Raworth’s book “Doughnut Economics: Seven Ways to Think Like a 21st-Century Economist.” Kate Raworth is with Oxford University’s Environmental Change Institute.

In the window is a placard displaying the book cover, and perhaps an answer to the dilemma we all face:

An Alternative to Growth Economics

Economic activity, Raworth says, should be “meeting the needs of all within the means of the planet.” We don’t need economies focused on growth alone. It’s killing the planet, and us with it. We need economies that “make us thrive” as the first priority. This means changing our picture of what the economy is and how it works.

Mainstream economics is most commonly demonstrated with a virtuous-cycle diagram. It’s an economic diagram that leaves out the virtues needed for our social and ecological reality. It charts a cycle of income flowing between home, business, banks, government and trade. It doesn’t include the social and ecological reality of life on Earth. Energy, materials, the natural world, human society and power are not accounted for.

Raworth has created a sustainable way to think about the economy. She uses a diagram in the form of a doughnut that in graphic form represents a world view in which people and planet are fully represented. Hence her use of “doughnut” in the title.

Relief from the discovery of Raworth’s book sweeps over me as I shake myself awake from the nightmare. Relief that there are answers to our dilemma. I find that the power is on. The stereo is playing softly, and I realize I’ve dozed off on the couch with “Doughnut Ecomonics” open on my chest.

“You never change things by fighting the existing reality. To change something, build a new model that makes the existing model obsolete.” – R. Buckminster Fuller 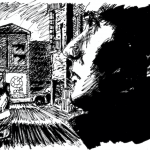