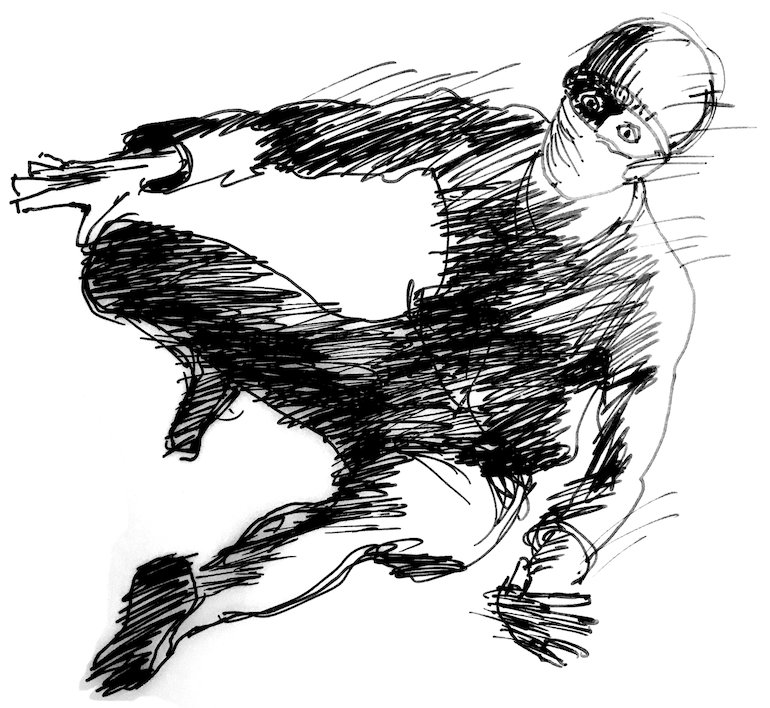 An endless stream of them. All doing 40 or more, on a street marked 25. A street built for two lanes, now filled with four lanes of bumper-to-bumper cars. Most drivers already wearing their masks. Men and women desperate to get to their jobs on time, so they could maintain the life depicted in the ads.

The crosswalk was clearly marked. Brie, masked and desperate, looked beseechingly at the oncoming traffic, begging with her eyes for a break.

A just-shaved guy in a Honda slowed, stopped, and pulled down his mask to yell, “Move it, girl!”

She ran for it. The Buick driver in the next lane saw her almost too late. Her progress stopped hard and fast; the impact was more shocking than damaging. Still, two skinned knees ain’t nothing.

Her adrenaline found words: “Fuck you!”

This as she picked herself up. Car doors opening. Words exchanged. Brie ran for it. Wanting none of the repercussions, and running hard now. Sure, she was at fault. Out of breath, she slowed to a walk and shivered despite the inner heat from running.

Zlorex shift-change times kept the factories running at as close to peak efficiency as possible. All to ensure production costs were kept down, and the stock price was kept up. Zlorex, like all top companies, had swallowed up most of its competitors with the help of lobbyists, government contracts, rich and influential shareholders, and increasingly wealthy C-suite management.

Brie walked off the hurt, embarrassed at being bested by a fucking Buick.

Gray. Rain on the way. The light-rail tunnel with its fluorescent lighting a bright spot. Down the steps littered with elegantly branded fast-food wrappers and logoed drink cups. The leavings of commerce and desperation. Brie stopped and studied the light-rail map, though she knew exactly where she was going.

The train stopped. Doors opened, and the work-bound muscled through the home-bound as the battle to enter and exit engaged both ends of the shift change.

Doors still open, crowd thinning, Brie went for it, with a timed stride, left hand on the gate, up and over. “Still got those high school moves,” she thought wryly as she slipped through the closing car doors. She made her way through the packed aisle to the next car, taking off and stuffing her red jacket and hat in her backpack, shaking her hair out as she went.

The train lurched forward. “Clearly,” she thought, “there’s still plenty of us who haven’t joined the gig economy, if the morning rush is any indicator.”

The train was filthy. The smell of puke and piss filled the air. Brie added a third mask, hoping it would cut down the smell. Everyone was masked, some with full gas masks on. Various gang tags marred the screens running ads for bank credit, weed, booze and over-the-counter pharma. Brie tracked none of this, hoping the graffiti gang had disabled the surveillance cameras on their morning rounds. She was counting on it.

Most the people on this train were headed for jobs that barely enabled their lives. Increasingly, wages were stagnant or falling. For most jobs, wages had been falling for years. People in the U.S., UK and EU who used to make good money to create the beautifully detailed graphics in the ads that invited consumption could no longer afford to pay their children’s tuition.

Single-family homes had given way to apartment blocks. When Brie was in the city she rented a cage to sleep in, with a toilet down the hall. It kept her safe while she slept, but that was about all. Most who rented the cages worked in restaurants, delivery and grocery. Spending their workweek in town, then leaving the city to visit their family when they could get a day off.

Brie was pretty sure she was being watched, by whoever did that these days, since she’d gotten out of jail.

Arrested at a rally and charged with resisting arrest…

“Ironic.” This from her lawyer, Giles, at the hearing. “Arrested at a peaceful public protest. Attacked by hired security and detained because she tried to deflect the hired cop’s blows.”

Giles sat down, whispering in her ear, “The real problem is that they can charge you with conspiring to overthrow the state.”

“Their search of your phone turned up the draft of your university speech. My best guess is that now you’re going to be watched.”

Brie’s speech asked a key question: Workers are creating massive wealth, so why is the administration letting corporations hoard it all?

“But wait a minute. Trump’s gone…”

“And you think the Democrats aren’t interested in maintaining the cash flow? Jesus. That’s what your speech is about. You’ve got to watch yourself.”

Brie found a seat and waited for the turmoil of the next stop. She surreptitiously tried to note those around her, just like they did on those spy shows. When the train stopped, she exited the car with the throng and moved down the platform, and then joined in with the people boarding and got back on. Now she had a black shawl covering her head, and a black neck mask replacing the three white face masks.

She couldn’t be sure, but no one seemed to be following.

On one of the working ad screens, Elon Musk was promoting his new city on Mars.

She pulled out her notebook to gather her thoughts. No more iPhone. She missed it. It was true withdrawal, like a friend had died. She wrote the questions she’d asked the students to address, from memory:

-It appears our democratic government is allowing corporations to hoard the massive wealth we’ve all helped them amass. What should we do to change this?

-It looks like the kings of capital are finally worried about the growing gap between rich and poor. How should we push them to take action?

-We need jobs with livable wages. Why isn’t that possible?

The train reached University Station. It was dirtier than she remembered, and most the lights were out. Before exiting the car, she ditched the scarf and put on her hat and jacket, this time with the dark-green side out. 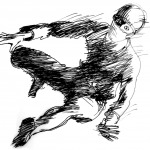