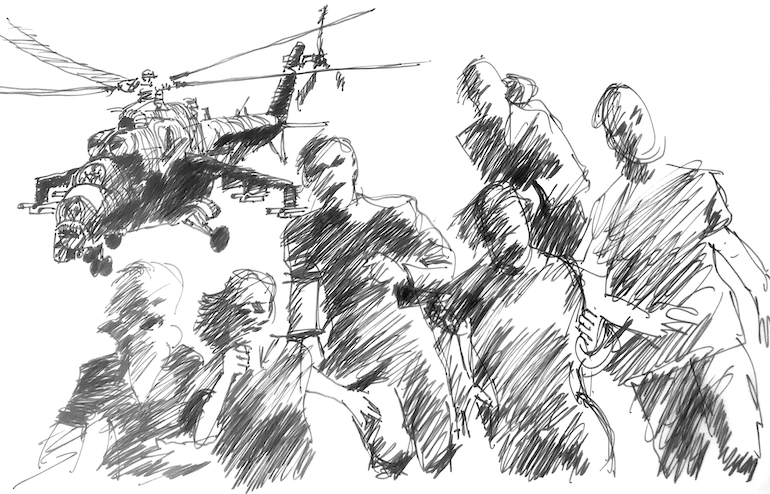 I dedicate this chapter to my good friend and our Marketing community organizer, Larry Coffman. His support has helped me gain confidence in my writing over some of the more difficult times in my life. Thank you, Larry.

It wasn’t just the forests that were tinder and on fire.

Some said the shooting was accidental. Others thought it was an assassination. In any case, when a much-loved and articulate leader is shot dead in front of her followers by cops, Hell is unleashed.

The match was struck.

It was a distant buzz at first.

Julian was the first to identify the sound as gunships.

He and four fellow students were headed for Edmonds, hoping they could catch up with Brie and Miss Ann there. The word at Shilshole Marina was that Miss Ann had been looking for fuel. The next best bet for her to refuel was Edmonds.

It was the sound that tipped off Julian.

“The last time I heard those unmuffled engines was in Syria,” he said to his friends. Julian had been deployed in Syria with the Marines. He lived through Hell there, but he did live through it. And as a thank-you, the government was paying for his education. Now, with the city in flames, who knew how that would turn out.

“Not good,” he silently calculated.

They were on foot, headed through Seattle’s mostly burning north end, when they heard the cannon fire from the approaching chopper.

Julian summed it up for everyone: “Shit.”

“Okay, guys. I figure if they see us, they’ll think we’re looters and shoot. We need to get inside one of these houses, or a garage. With a roof over our heads, so they won’t be able to pick us up on thermal.”

The nearest house to them had been partially burned—blackened and wet, but still standing. Julian thought, “Maybe the fire department has been through here.”

They entered the house, only to be met by a woman holding a shotgun.

The chopper was coming fast and low, and firing as it came. A deafening sound. They all turned to see a group of kids cut to pieces by the airborne cannon. And then the lady with the shotgun motioned them in.

“Unbelievable. My name is Nora. I’ve lived here all my life. This is insane! Crazy.” She was shaking her head, shotgun down now. Julian figured they must still look enough like students despite it all.

“Help yourselves to my house—or what’s left of it. I did manage to put out the fire. But it’s still a mess.”

“Thank you, Nora,” Julian said gratefully. We’re headed to Edmonds. We’re not looting – just trying to get out of here alive.”

“Can I go with you? I need to go with you. I won’t survive alone here.”

Glancing from one friend to another, Julian nodded. “Yes, yes you can.” Looking at her feet, he asked, “Got any hiking boots, or better walking shoes?”

Sally, a fellow traveler of Julian and the others, asked, “Nora, do you have a radio? Has there been any news?”

“I do, in the bedroom. I’ll turn it on. But I did hear that the governor had turned over managing the looting and rioting to the Gartel Institute.”

“The radio said that the National Guard was fully engaged fighting the fires that are threatening the corporate campuses. The state just doesn’t have the resources. South Lake Union has been on fire for days. Most of those people…”

Nora was interrupted by the roar of the chopper and more automatic fire. They could see that an ambulance and a small group that must have been helping the kids were under fire. The aerial assault didn’t take long.

They watched in silence.

Julian hugged Sally hesitantly, but she slumped into his embrace.

“Okay,” he said as he comforted her, “let’s all sit here for a minute and think. Listen to the radio. Maybe we’ll learn something. If we’re going to live through this, we need some kind of a plan.”

They sat in Nora’s living room. Tired, dirty and scared, listening to the radio in disbelief.

“This is KUOW, now broadcasting from the offices of the Gartel Institute. The governor is here with us, and we understand she is preparing to make a statement. Yes, here she is now. Welcome to our emergency studio, Governor Bailey. What can you tell us about recent events…?”

Julian, Nora, Sally and the rest of the group sat wild-eyed, staring at each other. The radio sat between them on the floor as the governor spoke.

“Thank you, Amanda, and thank you, Mr. Gartel and your institute staff, for providing a safe haven here in your facility. Fellow Washingtonians, reports coming in from the city and throughout the state indicate that our forces––that is, our National Guard, with the help of Gartel Security––have stopped the looting in most of the Seattle metro…”

Julian, shaking his head: “Why is the governor allowing Gartel Security to use military gunships to shoot kids?”

“…There have been terrible losses of property and lives. Our first priority has been to stop the destruction.”

Sally answered Julian. “It’s simple, really: Billy Gartel has vastly more resources than the state. It’s said his security detail has an annual spend larger than the military budgets of most countries. He and his fellow billionaires and trillionaires have sucked all the capital out of the global economy.”

“And here we are,” Nora said bitterly. “What was it… something called ‘predictive modeling’ that made all that money?”

They sat. They stared at each other, and they wondered. 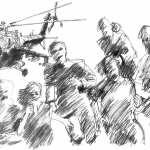