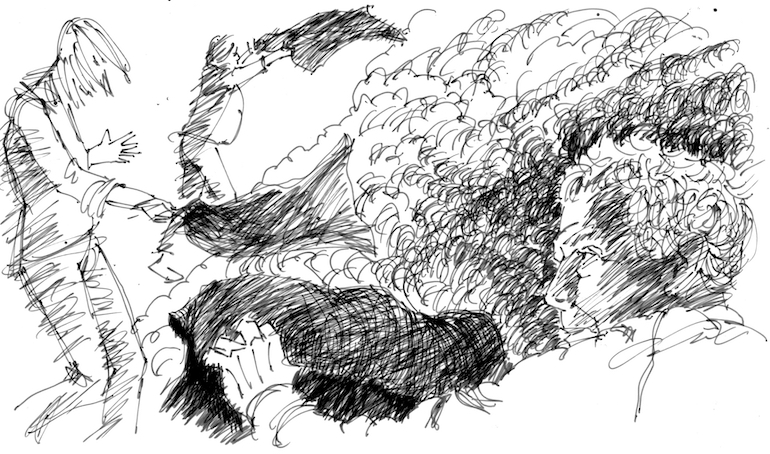 No visible flames now, but that didn’t mean anything in this hilly landscape. Fire could be in full force just beyond the ridgeline.

“Wind must be turning,” Brie said to Arial as she grabbed another wet gunnysack to beat out the embers on the line.

Everyone in town had been trucked to the fire line. That didn’t mean big numbers, as most of the town had been deserted for years. At any rate, protecting what was left of the community meant everyone who could walk was fighting the fire.

If it got away from them, it would gut the town – right down to the water where Miss Ann was moored.

When the smoke had thickened earlier, they’d begun thinking they should cast off; then the trucks arrived and the firefighters demanded they join the effort.

Much of the forest was long gone, and most of the small communities with it. All from a combination of out-of-control fires and a lack of jobs other than the meth business.

All this went through Brie’s head as she grabbed another freshly soaked gunnysack and went after the glowing embers in her section of the line.

Arial was to her left, and Tommy to her right. Both their sweating faces covered with soot, their clothes filthy, spotted with small burn holes here and there from the breeze-borne embers.

Exhausted. Wondering how long they could keep this up. Wondering if their efforts would lead to success. Reflecting on how the world had changed.

She kept swatting the small fires, which started again and again from a combination of wind-scattered embers and the smoking remains of the fire.

“We live in a world of artificial intelligence,” Tommy yelled as he went after a small blaze with his sack. “Massive advances in tech and science, and here I am trying to put out fires with a wet gunnysack. Funny… if you’re not living it.”

Brie wondered how Tommy could keep it up. He was old. Really old. He looked pretty good, but he must be in his mid-eighties. In an earlier time he’d spend his days playing checkers with the great-grandkids on a sunny porch somewhere. But out here, he was like the rest of the community: keeping the town safe so the meth cooks could continue operating. That was the economy around here. It kept the money flowing so the Safeway could stay open.

The town cops protected the stores, the workshops and the marina. They stayed away from the meth trade. The meth labs and the resulting export business paid their salaries. And everybody else’s, for that matter.

They’d been hoping for rain all week. And now Brie could feel the change in the air. Smell it, too. She looked up to see it coming in hard from the south. “Thank god,” she thought.

“You guys want a ride back to the marina?” This came from a raggedy gal leaning out of an old truck. Her teeth were little stubs, her hair wild. The truck was a welcome sight, only about half-full with others from the marina who had been coerced into the fire action.

“Jump in and grab a bottle of hooch,” the woman said. “That rain just saved us. It looks like a serious storm. Lots of wet coming now. Saves you little pissants from what was looking like a really bad night.” She delivered this with a toothless smile.

They piled in, exhausted and now soaked by the storm. Then lightning hit, with thunder on its heels. “Close,” Brie thought.

“Shit. Hope it don’t start another bunch of blazes,” said a young guy, no teeth and filthy like the rest of them. “Here, this should take the chill off.” He passed her a full bottle of Jack D’s.

Brie broke the seal and took a swig. Feeling the warmth instantly, she passed the bottle to Tommy, who was now shivering. “The cold’s getting to him,” she explained. “Skinny bastard. Never had any fat on him.”

Tommy drank long and hard. Brie worried that hogging the bottle might be a problem, and then noticed there were five or six bottles in play.

“That’s some good shit,” Tommy said as he passed the bottle to Arial.

He turned back to Brie. “I heard BAT now owns Jack and all the former Brown Forman brands. I also heard they now control most of the local meth trade. Think that could be true?”

“Could be. That might explain why this little enclave of meth producers could continue to exist. Must be exporting to Vancouver and Victoria. Maybe they have big money protecting them. Still illegal, of course. Paying just enough income taxes to stay out of the IRS crosshairs.

“Corporate consolidation has been accelerating, with the super-rich having the money to take full advantage of AI to reduce costs and increase production. Seems like meth is a natural for them. They could strip almost all the production costs out, once they feel like they own a big enough share of the market to go after the rest of it whole-hog.

“Maybe we have consolidation to thank for this whisky,” she said as she took a swig.

They hung onto the sides of the bed as the truck bounced down the old forest road, a rough track left over from the logging days.

Arial gestured at the surrounding landscape. “Honest employment gone, and with it the forest that used to protect our air. Ironic. What were considered good jobs cutting trees actually turned out to be destroying the planet, and us with it. Mostly dry brush on these foothills now. Fire fuel.” The truck bed fell silent as everyone pondered that.

Back at the boat, Arial filled the water tank as Tommy and Brie took showers below.

Arial, still filthy, stood on the aft deck listening to the tank fill, enjoying the rain and feeling good that Miss Ann was taking care of them.

Canned stew for dinner seems like an OK choice, she thought, as she felt the warmth of the Jack mingling with her sense of friendship.

They were rebuilding their little co-op group. Now they needed to focus their purpose.

The water reached the tank overflow, pulling Ariel back into the now. She stepped ashore to turn off the water and retrieve the hose, thinking about next steps – a shower being the first. 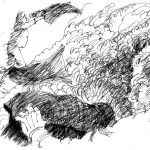