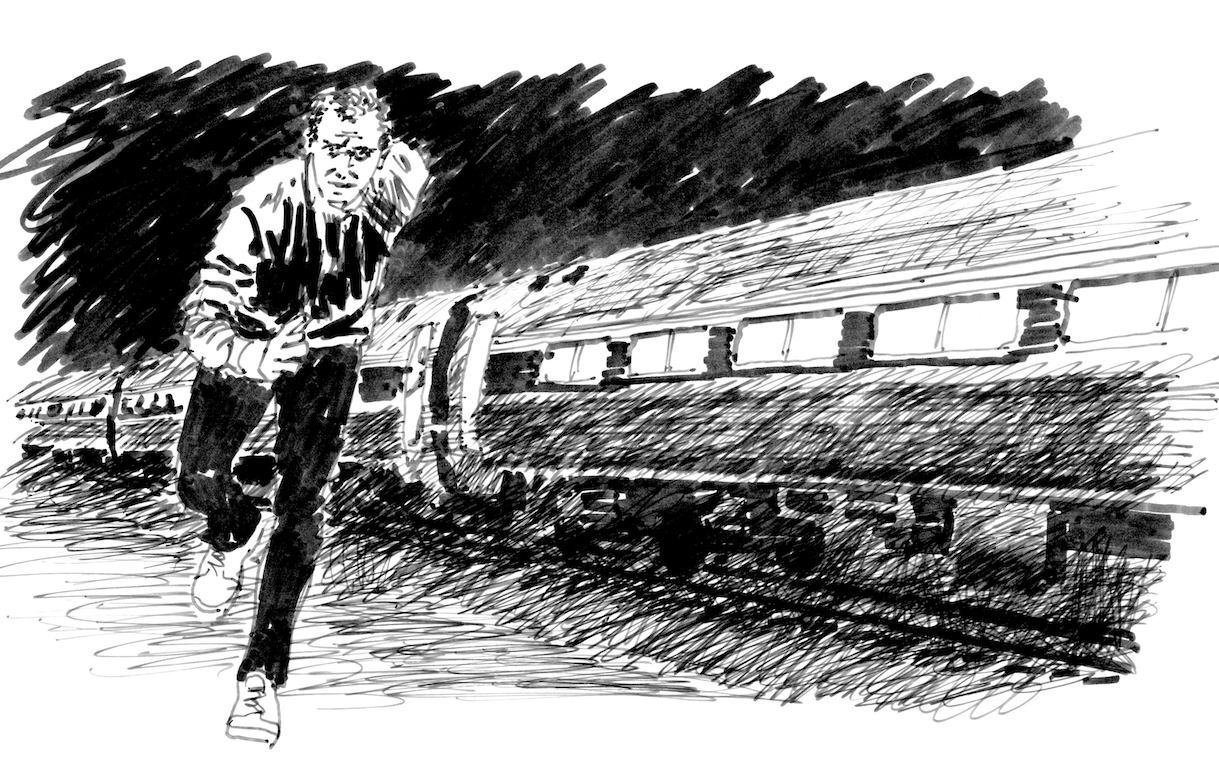 Got the money, wanna keep it.

Tommy left his seat and began walking up the aisle as the train slowed.

Living in a police state. Amazing how quickly things changed. Stock market continuously going up. Unemployment shrinking to almost nothing. And yet, 40% of us living below the poverty line, real wages shrinking, thousands living on the streets, local retail driven out of business by the chains and big-box stores, health insurance and housing unaffordable.

“That’s how it all started back in ’19 and ’20 when we started Overture,” Tommy thought. “And here I am in a world where Trump is running for a fourth term. And I’m about to run for my life.”

“Glad I’m a runner.” This as his feet hit the rocky track bed, train still moving. A stumble, thinking, “It’s been a long time since I’ve done this.” Not looking, not slowing, he sprinted toward the low buildings just south of the tracts, having a flash of his childhood playing in the Georgetown freight yards. Noting that this wasn’t his usual casual pace. Glad it was dim – heavy cloud cover. Felt like rain. Yup, it was raining. Smells of creosote and raindrops hitting the dusty ground. Glad he was wearing his usual Stan Smiths. Hoping Jessica had decent running shoes on, too.

Making it to the cover of the first building, he stopped and looked back. Jessica was on her way. Tommy was glad she was wearing her usual black. Almost a shadow as she sprinted toward Tommy.

Jessica out of breath, red cheeks. “What now?”

“Let’s keep moving. No telling what’s happening back there.” Off they went down the two-lane blacktop. Tommy hoped they’d find a ride. But so far no one had passed.

“I think we’ve got to get off this road. If they’re looking for us, this is where they’ll look.”

“Got any idea where we are?” This to Jessica.

They crested a low hill and could see a house and barn at what looked like a mile or so off the road. “Let’s cut through the fields. Maybe we could shelter there, get help or whatever.”

They took off at a jogger’s pace. The field was wheat stubble and rough. Runnable, though. Down the backside of the hill, the road out of sight now. “Let’s stick to this gully. Might be out of sight from the road.” Tommy checked his watch. It had been just 30 minutes since they’d left the train.

No one was home. Good. No people, no dogs. Good, good. But they couldn’t stay there long.

House was locked. Try the barn. Padlocked, but breakable with a short length of rebar lying nearby. Inside was a well-used vintage pickup. Looked early-’70s to Tommy. “Great; it’s pre-computer. Keys might be here.” Checking the visor and under the mat. Then the jockey box, nope; tops of tires, nope. “If we can’t find the keys, I think I can hot-wire it. Keys would be better, though.”

Just then Jessica said, “Here’s some keys. Are these them?”

“Nice work! They look right to me.” Tommy slipped the key into the slot, and with a small prayer turned the key. Yes! A slow grind, then a clicking sound. Jessica sighed. Tommy smiled.

“We’ve got ourselves a ride. It’ll just take me a few minutes to get her going.”

“Where’d you find those keys?”

“There’s a shop over there. Keys were hanging with some tools.”

A quick look and yes, a battery charger on a shelf under the workbench. Tommy quickly lifted the hood, attached the charger and switched it to the start function. Checking his watch again as he swung into the cab. Forty-five minutes since they’d jumped from the train.

“Jessica, grab those work clothes that were hanging in the shop. They just might help us pass.”

The truck coughed and started making a hell of a noise and a bunch of smoke. Tommy jumped out, disconnected the charger and threw it in back. “Better safe than sorry” came to mind. He pulled out of the barn. Jessica closed the door and made the padlock hardware look as unbroken as she could.

“Jessica, I think there were some old maps in the jockey box. Let’s see if we can find a back way out of here.”

Brie awoke in the back of a van, strapped to a gurney. She could move her head, but that was about all. Awake now. Remembering.

“She’s awake.” This from the guy in white Homeland armor.

She resurfaced, then remembered seeing that they’d gotten Dan. Then nothing. “Must have drugged me,” she thought.

“Where are we? What are you doing? Why am I strapped down?”

“You’re under arrest for aiding in the escape of your son Jamal.”

“What? Jamal is in Seattle staying with friends…”

“No, he’s not. He’s gone. But you can tell your story to the Colonel.”

“I need to call my lawyer.”

“No lawyers where you’re going, lady.”

The truck was terrific. Four-wheel drive, a full tank of gas, and once it warmed up the smoking stopped. “Perfect,” Tommy thought; a little rust and lots of mud, but somebody had taken good care of her mechanically. Tabs were out of date and she complained when shifted into first. Synchros going, no speed-shifting this baby.

“Got to stay off the main roads,” Tommy thought, as they got back onto the blacktop, went a couple miles and passed several crossroads. Jessica was on map duty, and she’d found what she thought was a route that would lead them onto a series of farm roads that would take them west and south, toward the mountains and the main transmission lines.

Once off the blacktop and a ways out of sight, they stopped and changed into the work clothes, stashing their stuff into a bag Jessica had wisely grabbed.

Then they were off. Looking the part, and pleased with themselves for getting this far.

“Shit, Tommy, we’ve gone from being a nice little co-op bent on making life better for people and planet, to fugitives on the run. I had no idea what we were in for when I signed on with Overture.”

“Me either.” Tommy was used to the assumption that being a founder meant he had the answers. But of course he didn’t. He answered Jessica with, “None of us imagined it would get this bad.

Tommy reflected. “None of us imagined Overture being anything more than a creative consultancy. Helping organizations become better by treating people and the planet with respect.”

The truck hummed along. Dirt roads, flat and straight. Endless fields. Tommy and Jessica headed west, then south. Afraid to use their cellphones, they had to get close to major transmission lines to talk to the Overture Seattle team.

They took over the world. And we find ourselves living in their creation. A world that increases their power and decreases ours. We shake our heads to rid ourselves of the bad dream. But it won’t go away. We wonder how it happened. Then we remember the ’20 election, in which three billionaires competed for the presidency.

Tommy reflected on the irony of his own feelings: insane jealousy. Wishing he had that wealth at his disposal, just for a moment. That feeling of envy would just creep up on him. Then he’d catch himself and remember that the feeling itself was insane. Selfish. Ugly. Maybe at his core he wasn’t any better than they were. So here he was, pounding down a dirt road in an old truck. Trying to save the world 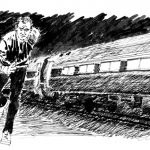