Building the raft was easy 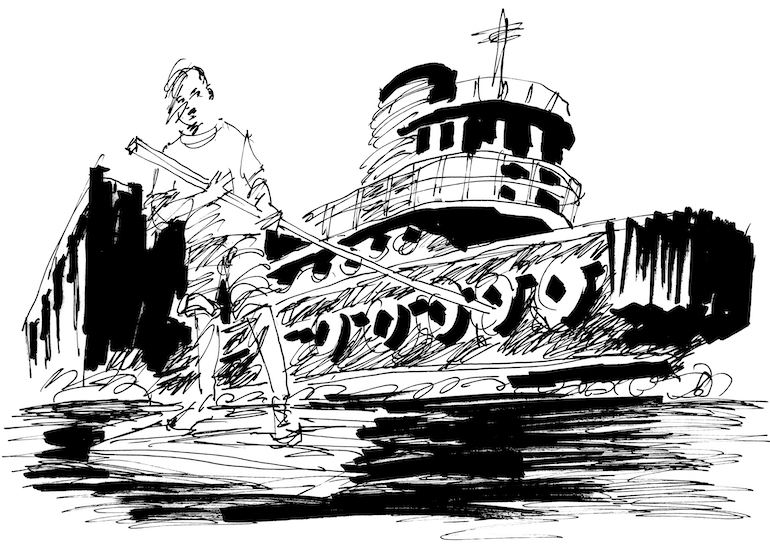 Why a Huck Finn wanna be story on my “professional” blog?

Life has never been a straight line for me. I know it seems ridiculous to say that. I’ve always been fairly focused on achieving my professional goals. But day to day I’ve always meandered from one thing to the next. I’m easily distracted and have a short attention span. Early report cards said exactly that.

Over time I’ve learned that my meandering episodes are typical of creatives.

After writing this story I realized that it’s just another example in a long line of examples of my meandering reality and how I’ve learned to take advantage of it over time.

Dad’s hammer was tucked into my belt, a length of rope was looped around my trunk, and I had a bunch of large nails in my pocket. I jumped on my bike and headed for the river with visions of Huckleberry Finn in my head. A beautiful day.

I knew the location well. Dad had scoped out an abandoned lot on the banks of the Duwamish where a sawmill must have once operated. The lot was covered with mountains of wood chips and sawdust. He planned to spread the chips over the planting beds in our yard as a decorative cover.

On a previous scouting trip, I played along the riverbank while he and Mom filled the trunk of the car. The Duwamish is Seattle’s industrial river; factories and workshops line the banks. Tugs towing barges and commercial boats ply the channel.

I noticed the scraps of lumber and short logs among the discarded wood chips, and thought they’d be perfect for a Tom Sawyer/Huck Finn-like raft. I’d been reading about their adventures and escapes from the adult world. This seemed like a perfect opportunity for me to escape mine.

So the rest of that day and through the balance of the weekend, I planned my Monday escape. I drew the raft I would build. I figured it only needed to be large enough to support me, and that I’d just build it, try it out and then make any refinements needed.

Arriving at my river location, I found an old tarp I could hide my bike under. There were plenty of homeless men around who would steal it for the few bucks it would bring, so I covered the bike, and then the tarp too. Using a discarded shingle as a shovel, I covered as much as needed to make my hiding place nearly invisible.

Now, on to the raft project. I quickly found that some of the logs I’d counted on were so heavy that they’d barely float themselves. Waterlogged, I guessed. But there were smaller chunks of finished lumber sticking out of the mounds of sawdust. I figured they must have been discarded ends, maybe too short to be useful. Light, too. Cedar, I thought.

After much digging out and dragging promising bits to the shore, I began to nail the pieces together, using the boards I’d found earlier as decking.

It must have been noon before my raft was ready. I dragged her into the water, and yes! she floated. Using my rope, I tied her to a handy piling and began my search for a pole. Tom and Huck used long poles to control their raft.

It didn’t occur to me that the Duwamish was not like the Mississippi.

It required an extended hike to find a suitable pole. Leaving my bike and my new raft seemed okay; no one had taken any interest in what I was doing. The bike was hidden, and my raft was so crude she looked like everything else discarded on the riverbank. It hadn’t occurred to me to bring a saw, so my decking was of all different lengths.

I walked back through the neighborhoods that were just beyond the commercial zone along the river. I figured the alleys would be the best place to find discarded building materials, or maybe an extra-long garden stake like Dad used for his pea vines.

Sure enough, I found a whole stack of long garden stakes. As I was pulling one out, I felt a strong hand on my shoulder and…

He must have been retired, to be home on a Monday. “Just my luck,” I thought. I needed a story fast.

“The Fourth of July is coming up, sir!”

“Yes,” he said, holding me by the arm now. I knew I could outrun him. He was old, but his grip was firm.

“Yeah, so the Fourth’s coming up.”

“I wanna make a flagpole.”

“Well, those are my garden stakes, and I need ’em. You’re stealing.”

Then he thought for a minute. And I figured I might have a shot when he asked, “Why do you want a flagpole?”

I’d recently seen the famous photo of the solders raising the flag on Iwo Jima, and took inspiration from the memory. I hoped the old man was a vet.

“I want to put up a flag for my Dad on the Fourth.”

The grip loosened. I looked him in the eye, and his hand fell away. Now I knew I could run. But I wanted that pole. I wanted him to give me the pole.

“You don’t need a pole to put up a flag, kid. You can just tack it up on the side of your house.”

“Sir, my dad was injured in the war.” Now I thought I needed just a little more. “You see, he’s in a wheelchair, and he’s been having a hard time sleeping through the night. Mom says it’s the memories that…”

“Tommy. Tommy Charles.” My middle name is Charles; that’s why I thought of it. Figured it was common enough that there must be a million Charles families around.

“Yes, over in Georgetown.”

And I was on my way, feeling the blush of pride at getting away with it. Always a danger, that pride.

Back to the shoreline, to find that my raft was fully afloat now. Good thing I’d tied her up; I’d not considered the tides.

It was hot now. Midafternoon. The whole thing had taken way longer than I thought it would. My bike was still there, hidden and undisturbed.

I was in a hurry now, anxious to shove off and head down the river. Stepping aboard, I was thrilled to find that she supported my weight just fine. Seemed stable, too. I pulled myself up to the piling, untied the rope and gave a shove.

It must have been the combination of the light weight and buoyancy of my craft plus my energetic shove, because we were midstream immediately. Then came the deafening blast of a tugboat horn. I turned to see the tug bearing down on me, pulling a huge barge. I grabbed my extra-long garden-stake pole and endeavored to pole myself to safety.

The water was too deep. Deep enough to be well beyond my pole’s reach. The tug blasted its horn again.

I threw down my useless pole and lay on the deck, hands over the side, and began paddling as fast and as hard as I could. And the raft moved. And I kept paddling. Paddling hard, getting soaked.

The tug passed by. Guy on the deck yelling at me. I couldn’t tell what he was saying.

Kept paddling, managing to miss the barge. God, it was immense. Huge black wall of steel passing me by. Then the wake was washing over me, pushing me back toward shore. That was good.

I was sort of out of the way of the river traffic, but soaking wet. It was a hot day, but the water was cold. Really cold.

I tried the pole again, but she still couldn’t find bottom. And we’d drifted a long way. I couldn’t even see the point where we’d launched.

I figured I needed to get to shore – ditch the raft and try to get home before Dad got back from work. Tell Mom we kids had been out playing with the hose.

Just then I saw the police boat. “This isn’t good” immediately flashed through my head.

They pulled up gently, and a big guy grabbed my arm and pulled me aboard. Then, using a boat hook, he grabbed my line and tied my raft to their boat.

“Kid, you almost died out there. That tug could not stop, or turn, or do anything to avoid you. You’re lucky to be alive. What’s your name?”

I figured the Tommy Charles bit wouldn’t work with these guys.

The jig was up

I’ve always been creative, full of energy for a new project. Often too much energy and too little planning. Often starting too many projects to finish. The vision and the allure of building the raft overwhelmed any truly thoughtful planning, which was very typical of me then. I’ve tried to be a better planner as an adult, but I still find myself falling into the same old traps.

Often, telling a story could help me get out of serious danger or avoid damage.

I was very proud of my improvised story that day – and for getting away with it. I got into plenty of trouble the times I was caught telling stories like that one as a kid. Eventually I learned to not shade the truth quite so blatantly. My hero Huck Finn liked to slip in a little truth-shading whenever needed. Maybe not the best role model.

I’ve found that telling stories is very useful when teaching, and also as a negotiation tool. If you want someone to remember something or buy into a concept, a story helps. Somehow a good story makes things just a bit more memorable. And stories that involve some aspect of failure seem to me to be the most memorable of all.

By the way, the police officer who scooped me off my raft didn’t call my parents. I’m still grateful. 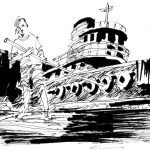